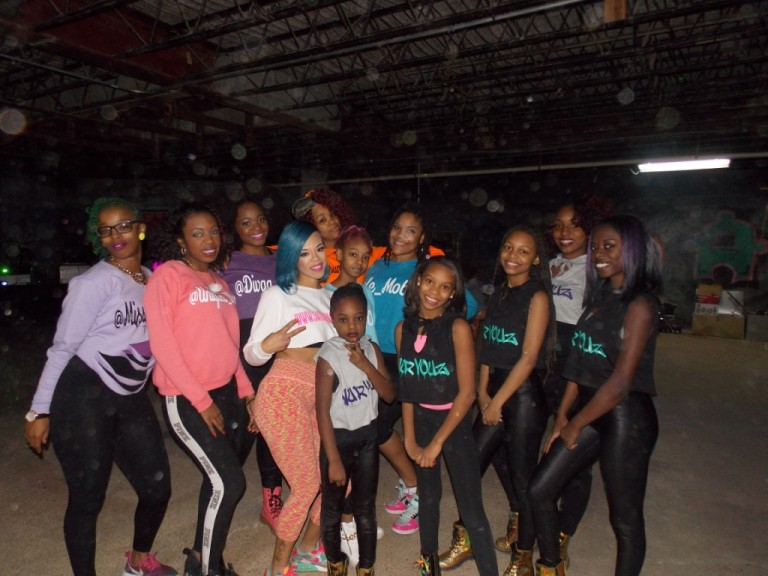 Seven Reflections says the name “Satoria” means “you are the creator and promoter of original ideas and usually enjoy considerable financial success” The name is described as “bold, independent, and intuitive”. Evidently Satorias “know what they want and when they want it”. The name is one-of-a-kind, and after getting to know Satoria Nicole, Seven Reflections seems to be spot-on… 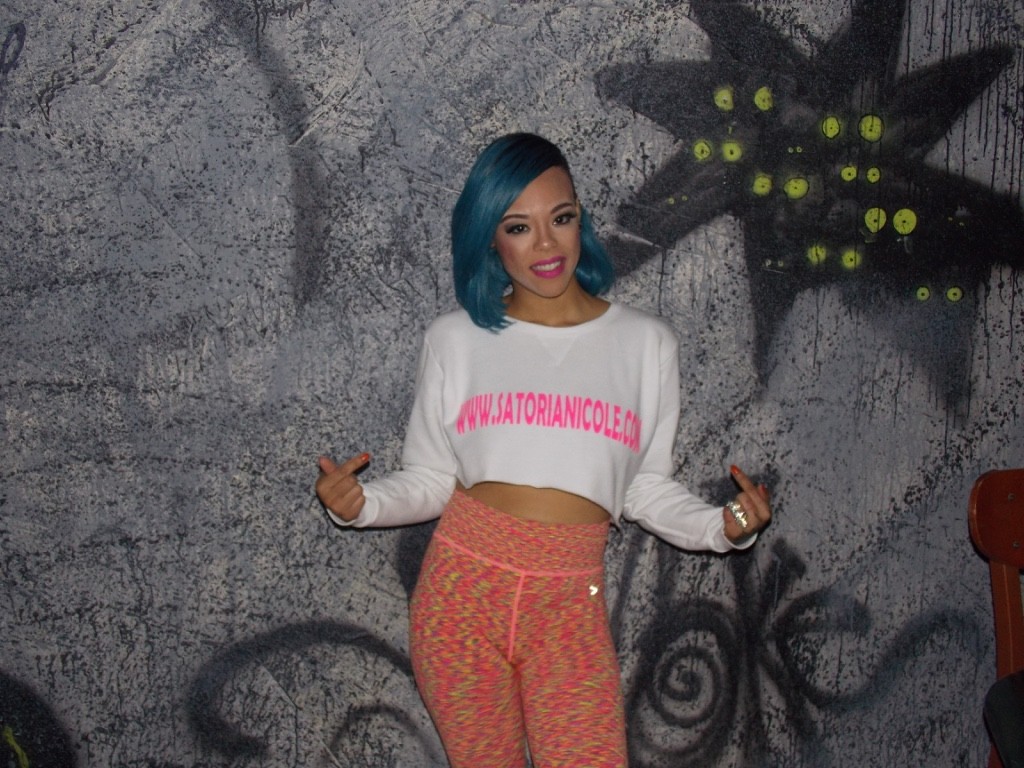 Earlier this month the team at G&S gave all of our glitter girls a behind-the-scenes look into Radio and TV personality Satoria Nicole’s annual dance video shoot. We arrived on set at Michael Copon studios in Downtown Norfolk on a snowy Saturday afternoon to check out the magic. As we arrived, a stunning Satoria with a blazing, electric blue angular-bob cut greeted us with a friendly hug, quickly introducing us to her massive camp of movers and shakers. From choreographers to makeup artists, DJs, singers, songwriter, writers, and a team of young dancers, the scene was bustling as the cast was setting up.

You may recall Satoria’s 2015 music video cover of Bey’s 7/11 which quickly grew into a viral sensation. When asked about this year’s dance video, Satoria says, “I’ve loved to dance since I was 4-years old. I wanted to think of a creative way to promote my radio show and TV show, so I decided to shoot, 7/11 last year and everyone kept asking, when are you going to do another one, when are you going to do another one? So, I decided to do another one”. During our interview, she says “I will do it once a year…or twice, maybe one in the spring and one in winter” she muses.

Although petite in stature, with abs to die for, Satoria is a mighty powerhouse. Not only is she the voice behind the Satoria Nicole Radio Show and face of Rep Ya Set, she is an actress and set to appear in 4 upcoming film projects including Davonya’s ‘All I Want’ to debut on SKY4, No Plan B 3, and a few others.

While Satoria joined a talented group of dancers on set to run choreo, we chatted it up with a few other Hampton Roads entrepreneurs putting in work right here in the 757 and frankly, anywhere they can leave an imprint. We event caught a glimpse of homegrown celeb Michael Copon who peeked in on the set. 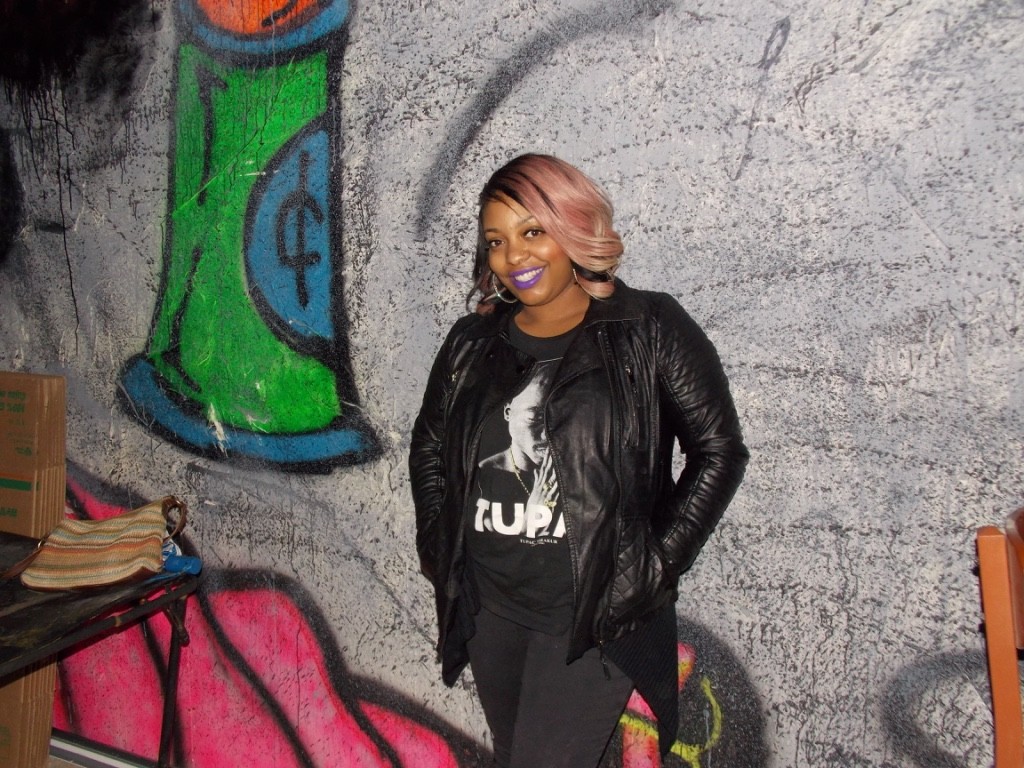 On hand to ‘beat face’ was the lovely NY-native and Hair Icon Stylist Lauren Moore aka @TheKolorKween, Makeup Artist, Hairstylist and Colorist who followed her dad’s footsteps into the industry. Having got her start 9 years ago, advice for aspiring MUAs? Lauren says, “Be original, don’t copy everyone else, stay true to yourself and your art, and you will always stand out”.

The team also checked in with singer, songwriter, and actress Missunderstood, a dynamic artist  on a mission. A friend of Satoria’s for over 17-years, Missunderstood tells us she’s not really a dancer, but would do anything to support her friend who is more like fam. Focused on delivering what she calls “Nubian Soul”, Missunderstood is set to release her 3rd album with a live performance called “Witness”, a testimony to a new season in her life. The artist will also appear alongside her longtime friend in “All I Want” which is due to release in 2016. In regards to her plans for the new year, Missunderstood tells G&S, “When you pray for something, you will need to be ready when it comes, whatever door opens, we’ll just bless it for ‘em”. 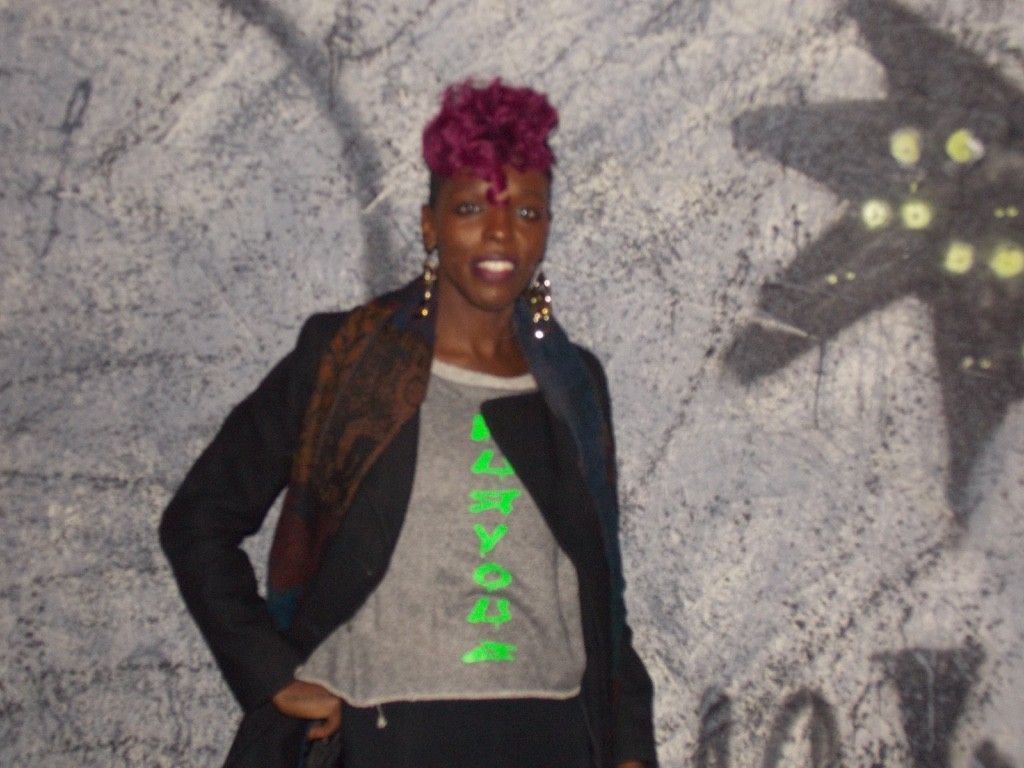 Breaking away for a moment to catch a bite after running choreography, we caught up with Shameka Fennell who directs the popular dance team Nurvouz. Shameka, who is a sought-after dance instructor and choreographer came through in a pinch to help choreograph Satoria’s latest video. Shameka started working with teams in 1996 and hasn’t stopped since. “It takes me about an hour to make up a routine”, she says. About her passion for dance? “I love teaching kids, that’s my thing. Keeping them off the streets, keeping them focused, and teaching them how to be respectful young ladies, that is my main goal”. Members of Nurvouz were on set delivering a few of their signature moves and wow these kids can dance circles around just about anyone.

Just before filming kicked into gear, Satoria’s partner Antonio Sparks of Square One Entertainment & Square One Record Label filled us in on how he manages to keep up with such a busy maven, “This is what it takes to keep grinding to keep moving forward, I had to support her”. 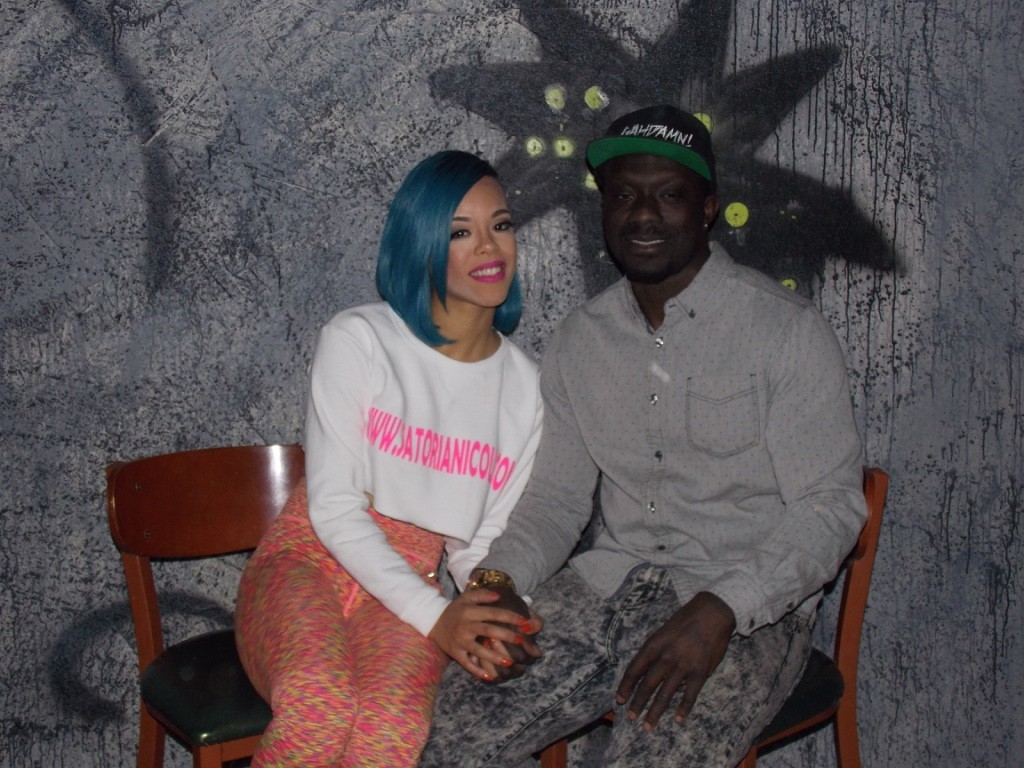 Antonio beams as he speaks of VA’s top lady in entertainment but, he also shares that he’s got a few projects in the works himself managing a new artist Big Red and a venture into event promotions and athletic management. We wanted to find out what Antonio is on the lookout for when signing new talent, “I have to see your drive”, he says. “I need you to see that I have insight just like you have insight”. Antonio’s advice for aspiring artists “don’t always go with the first thing that comes up to you. Do you research, a lot of people will sell you a dream, I will show you your dreams…if you work hard, this is what you can do, do your research.”

The music was loud, the set was live, and the dance moves fierce, we cannot wait to see the final cut. Satoria, who has made a name supporting other artists says she was “inspired by Oprah at a young age” to enter the entertainment industry. The media socialite shares, “I eat sleep and breathe entertainment”. Satoria’s words of wisdom to aspiring entertainers, “No matter what, no matter if your family believes in you, your significant other believes in you, if you have a dream and something that you really want to do…in order to succeed and achieve true happiness, you have to do what you want to do.” Just before wrapping up the shoot, and in between shots, Satoria tells G&S, “I want the world to be a better place, I want the world to be happy, I want to make everyone happy”.

To learn more about Satoria Nicole and company, check out the links below! 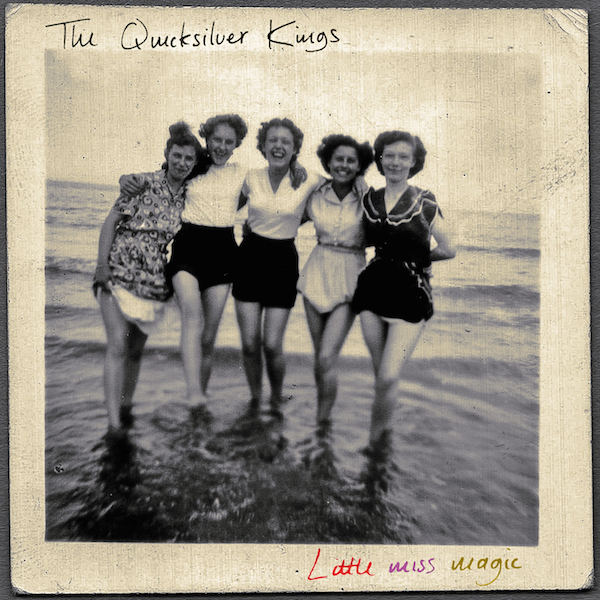