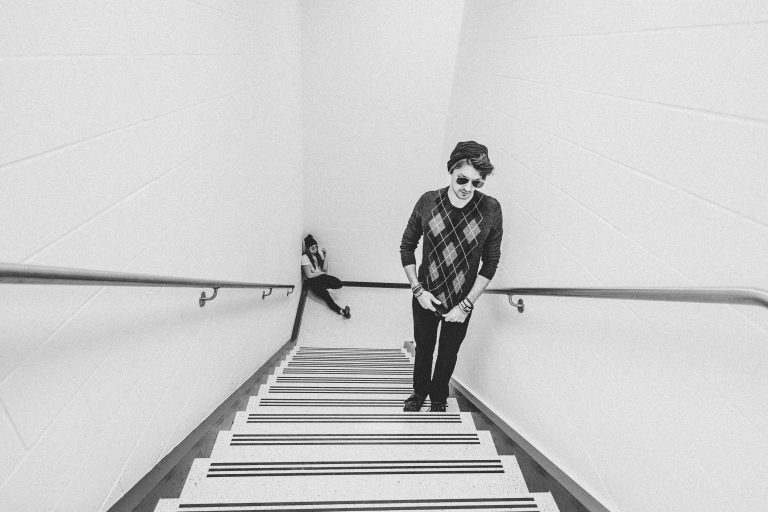 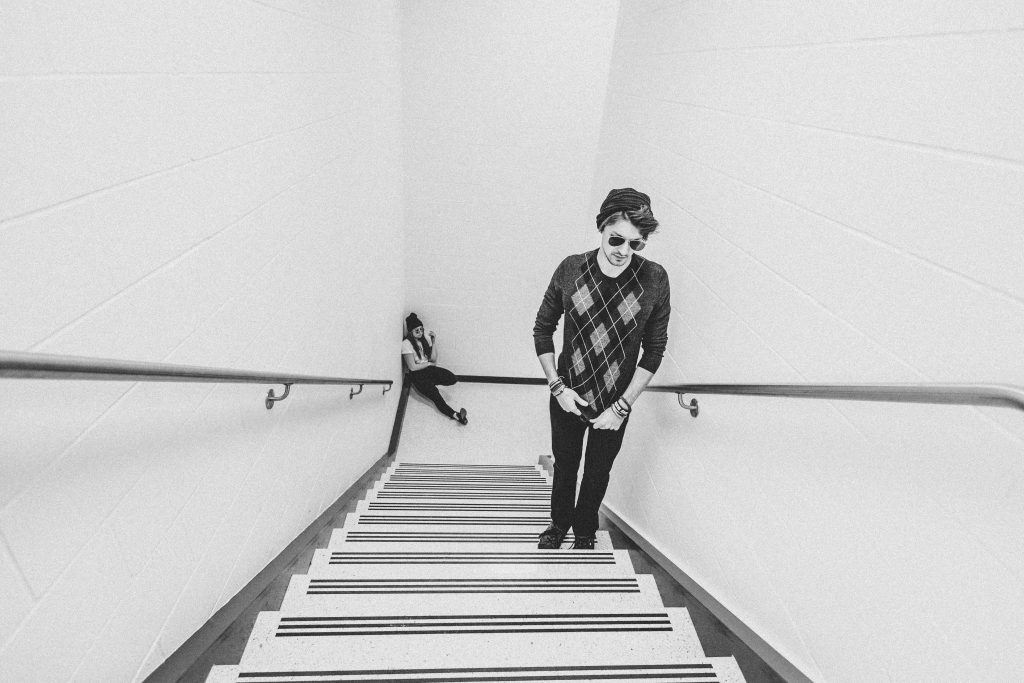 This month we are featuring Iowa City band Shades, a brother and sister collabo whose debut EP ‘Can’t See The Haters’ is currently making waves across the music sphere. We wanted to get some further deets on the band’s project and gain some further insight into their ethos. Check out our interview with Shades members Casey and Mary Mattes below. 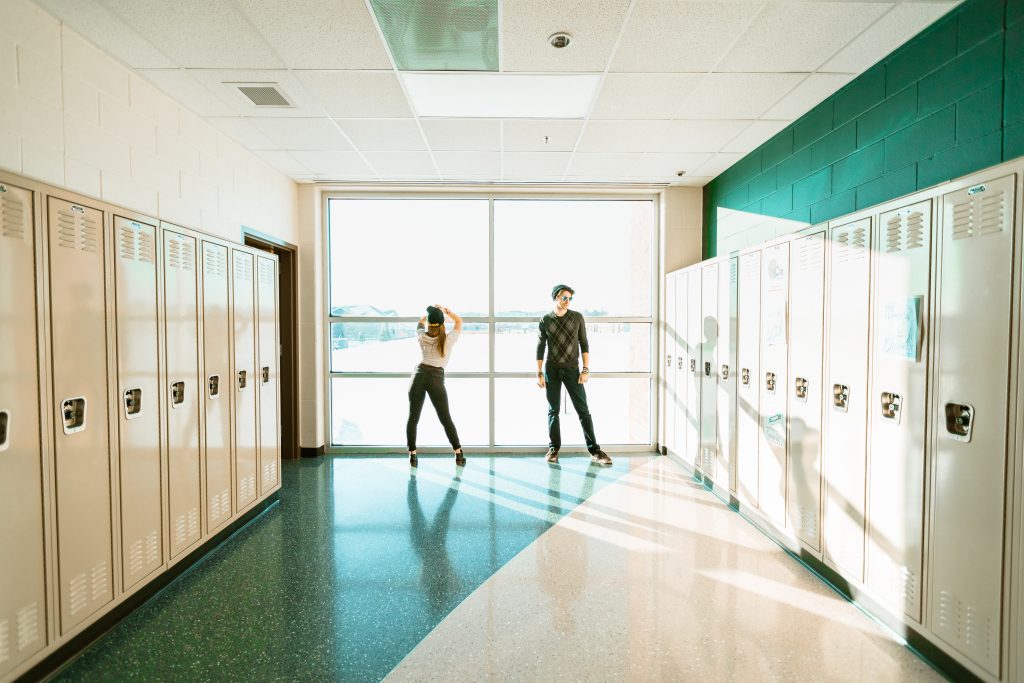 Can each of you share with us how you got started in music?

Our dad is a professional guitar player, so we’ve grown up with music as long as we can remember. I’ve played in small bands with friends since high school, and decided to pursue music on my own while studying it in college. Once I noticed my sister’s passion for the same creative arts, I knew we needed to team up to create something amazing.

What inspired you to team up to form a band?

Music is about expression. We’ve both been through so much, and we know that our fans have too. Mary puts her heart and soul into the lyrics of each song we produce, bringing forward problems that people our age are facing daily. We wanted to find an impactful way to address these issues presented throughout life and make our fans feel as though they’re not alone.

Shades has a very eclectic sound, who would you say are some of your musical influences? What types of music is in your playlists right now? 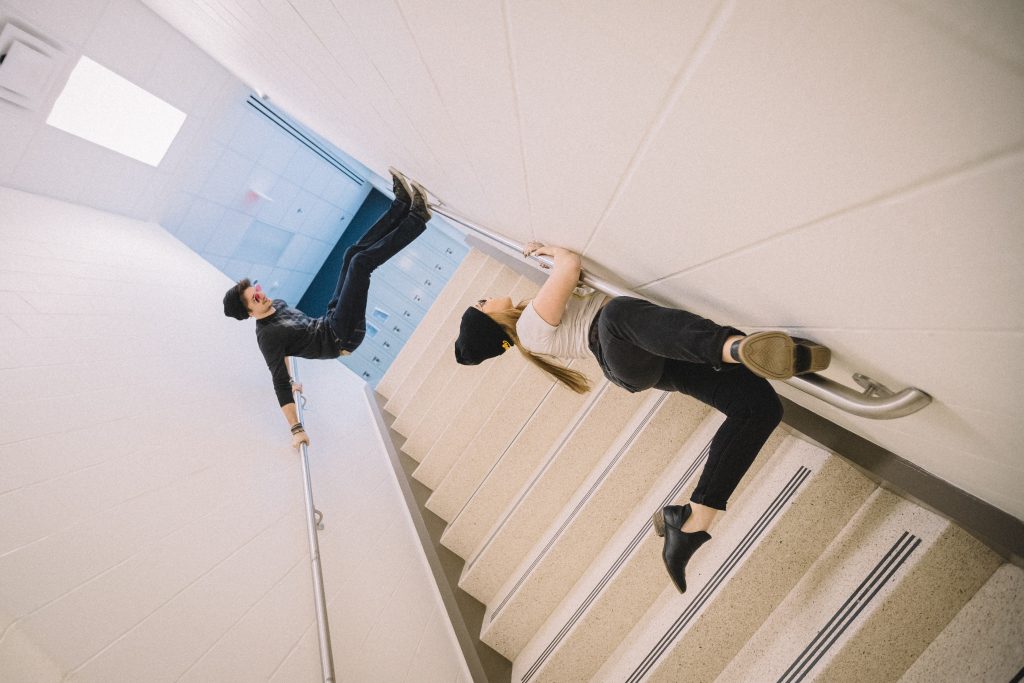 What made you decide to come up with the name Shades for your band? What is its significance?

We wear our Shades so we can’t see the haters!

Can you describe what a typical creative session would be to come up with a new song? What goes into the whole experience that we as listeners hear on the other end.

We’ll be creating some BTS videos to demonstrate the answer to this question. But for now, I (Casey) produce instrumentals and hand them over to Mary. She writes lyrics, we record, and I mix/master the music. Our beats and lyrics stem from very personal experiences.

‘Can’t See The Haters’ is your first EP, how did you decide on the song selections for the band’s debut?

We created an array of songs, but chose these because of their importance in creating our image. They’re based around our band name and everything we stand for. And, man. This EP is just the beginning.

Most kids today are just looking for a good beat it seems, especially in the mainstream. How important do you feel lyrical content is in music?

Lyrics are everything. A song without meaningful lyrics is wasted potential.

As an indie band and being in control of all aspects of your art, are there any difficulties or challenges in putting your music out and if so what are they and how do you manage them?

It’s difficult getting your music out there for just about any band without many industry connections. We’re based out of Iowa City, IA, so that’s a tricky work-around as well. Our band manager, Teressa Mattes, is doing a great job distributing our music to our passionate fans around the globe via the internet. Mary and I are perfecting our live show now, as well as recording more dope tracks for future EPs/albums. We’re going to continue putting in the work! It’s all about the grind, after all.

How long did it take you to work on your EP?

Now that the EP is out, how do you feel about its reception?

We love seeing the feedback on social media outlets such as Instagram and Facebook. Our fans are the best!

Can you tell us a little bit about the music scene in Iowa City?

Iowa City has a very tight knit music scene. Most bands who play here are still in college, except for the occasional more prominent artists who plays at Blue Moose. I’ve played as a solo artist at Blue Moose a number of times, and am looking forward to returning with Mary this year.

What are the best and worst things about working with your brother/sister?

We value family most out of anything out there. It’s amazing to be able to collaborate with the people you know and love, and at the same time work together to bring new experiences and ideas to the table when it comes to creating new music. We both have our own taste in music, so sometimes that delays creating new tracks, but it is always for the best. If we both approve a song we work together to produce, we know that fans of multiple genres and sounds will too!

Are there any other acts that the band would want to collaborate with in the future?

We’re down for anything.

The new year is really just starting and you definitely kicked in some doors with your project, what is next for Shades?

Keep an eye out for our next EP drop at the end of March 2018! It’s as gritty and lux as it gets… 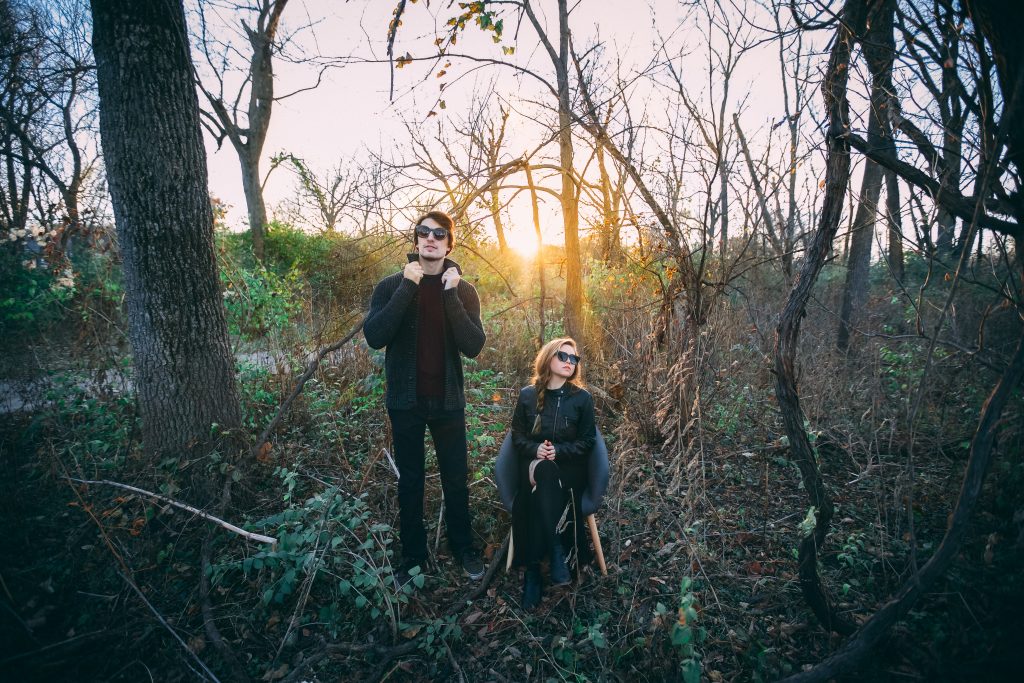 Shades is an American indie pop band formed in September 2017. The duo consists of siblings Casey Mattes (producer), and Mary Mattes (singer). Shades is a DIY pop group who writes, produces, and mixes/masters their own material from their home studio in Iowa City, Iowa.

Casey Mattes’ original music has been featured on “Spaced Out Magazine”, “VERSED”, and has won Artist Prolist’s Platinum Spotlight Challenge TWICE within the same year. Mary Mattes has been featured throughout Casey’s original songs over the last 4 years. Mid 2017, the brother and sister decided to combine their talents into the hit duo you see today.

Shades’ music style has been described as “dynamic”, combining elements of electropop, alternative hip hop, and EDM. Their lyrics, written by Mary, are poetry-based and reflect the all-too-real emotional states of many twenty-somethings who struggle to thrive in today’s world filled with hate.

In January of 2018, Shades dropped their first EP, “Can’t See The Haters”, consisting of 6 songs. “You can either let the hate blind you, or you can block it out,” said Casey, referring to their latest release. “This EP both introduces our band name to the world and describes the underlying meaning behind every piece of work we create. We wear our shades so we can’t see the haters, and we encourage you to do the same.” Casey continued, “This EP is just the beginning. We’re so excited to share with you what’s next.”

Their opening track on the EP, “Kill the Darkness”, was written to express the frustration built from the blossoming of an irrational, yet sweet fixation. Mary mentioned that this song represents an expression of consequence; when you let yourself recklessly fall in love with someone you can’t have, knowing damn well you’re diving into some murky morals.

In a nutshell, “Not Really Sorry” is a snarky, taunting song written about rejection. But more so, it’s lyrics represent the celebration of a sheer reluctance to compromise independence for a relationship. “Independence is an empowering trait,” said Mary. “This song for me conveys a realization of self importance and self empowerment… It’s just snarky as heck.”

“Rainbowz” is by far the most unique song on the EP, loved by fans favoring all types of musical genres. “Writing this song was a unique experience. At the time I had just become homeless, so I was bunking in my car for the night. With nothing to occupy my attention, my mind fell down a Wizard of Oz rabbit hole, puzzling over how f***ing weird of a story it is, and all the conspiracy theory potential it has… Naturally, that segued into forcefully rapping about rainbows. But, in all seriousness, this song is an adaptation of the story’s concept- an interpretation reflecting my state of mind at the time.”

The statirecally written, romp of a song “American Dream” describes the current state of both our country and the world we’re forever evolving, for better or for worse. “I’m forever going to utilize social and political f***ery for creative inspiration,” stated Mary. The song lyrics take an independent stance for women and men of all traits, and implores acknowledgment from governmental personas.

“Back & Forth” is an extremely catchy song about being fed up with shady powerplay in all facets of life… We’ll just let the lyrics speak for themselves:

up and down of a power source

we’re stuck in a game, an oscillation

for a twisted rendition

of something more divine”

The title track, “Can’t See The Haters” started out as an instrumental track which Casey composed between midnight and the early morning hours of one single week. Mary was given the song, & told to “run with it”, both vocally and lyrically. Mary explained, “For a while, it was just ‘Sad Song in F’. We wanted something genuine and impactful for this song. It took delving straight into my feels and digging out my most vulnerable self to pull together the exact sound and feeling.” This anthem of a song is a fervent breath of fresh air in the music industry today. “Can’t See The Haters” is quickly becoming an intoxicating, enduring crowd favorite among fans.

Shades’ unique mix of indie pop and alternative hip hop has become a crowd-pleasing genre which the duo has used to gain a massive following in their hometown. It won’t be long before their music is sung by audiences across the nation! 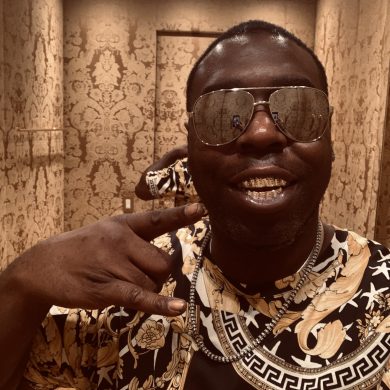